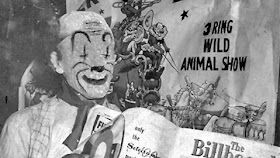 Every town has it’s ghost stories. Most start with some minute grain of truth and morph through the telling to grotesque tales of murder, mystery and metaphysical terror. Old houses made grey by the elements are the settings of disappearance and death. The stories serve as grim warnings for the curious to stay away or risk certain doom, which often succeeds in drawing in nosy, drunken trespassers.
I first heard about the “clown grave” on a bus driving us high schoolers home to Stellarton after putting on a musical at the DeCoste Centre in Pictou. The bus was dark, our faces were distorted with the remnants of theatre make-up, and the atmosphere was electric with the post-performance buzz. Some of the older kids started telling us stories about their experiences visiting this clown grave – his eyes followed them as they moved around the grave, his hand would be in a different position, they heard voices, saw lights in the distance… all very ghoulish, and nothing particularly frightening (unless you were the 8 year old girl we forgot was on the bus, she had nightmares for a week).
The stories made for an interesting bus ride, but I slept fine and there was no lasting trauma. A few months passed, maybe more, before I had the chance to visit the grave myself. And you know what? Even though we went in the daylight the thing was still enormously creepy.
I hadn’t thought about the clown grave for a few years until this past weekend when I was camping in Caribou, just outside of Pictou. On Friday night we made a run for some necessities at Walmart (somebody forgot to pack underwear….) and on the way back we decided to make a little detour down to the Haliburton Cemetery. This time it was dark, so we kept the headlights on but even though we’re adults, some of us parents, only two of us were brave enough to get out of the car. We didn’t waste any time running over and snapping a few pictures before jumping back in the car and racing away.
The cemetery itself is obscured from sight by the tall grass and gangly trees that flank the entrance. To the left of the driveway the field is overgrown with grass as tall as the car. But someone seems to still care about the place because once you round the bend you can see the headstones emerge like beacons reflecting the headlights.
The clown grave itself is easy to spot. A granite and plexiglass case was added years ago to prevent any weather damage or ill-willed vandals and it stands out among the gray and black of the grave markers spreading over the field in rows. Getting closer, the figure of a small, sad clown emerges from behind the short pillars and its clear why it has inspired the stories I’ve heard: 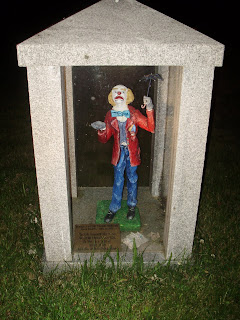 See?? Isn’t that creepy? Unfortunately, I have no tale of terror to add to the myth of the clown grave. Our friends beeped the horn and we ran back to the car giggling after only a few minutes. It was a cemetery at night, after all. What gets me about the grave itself is not the clown but the epitaph penned by Twitter Johnston:
“To talk beneath the moon
To sleep beneath the sun
To live in a land of going to do
And die with nothing done.”
Why was he focused on regret at the end? What was left undone? I could only find one little blurb about the man who wrote the verse, but to an onlooker it seems like he led an interesting life. He was an acrobat, a sleight of hand artist, a circus performer, a tumbler, he was a part of a vaudeville troupe and traveled fairly extensively. Sounds like someone who was following his passion – and yet at the end he’s still looking over his list of things to do and lamenting that so much was left unchecked.
He maybe didn’t think he got much done while he was here, but his nickname has become pretty influential in the past couple of years. We’ve been talking about him everyday and didn’t even know it.
I’m trying to put a positive spin on his message, but it’s not coming together. Maybe he was trying to leave us, like the audience at his performances, wanting more. In the end it sounds like he procrastinated on what he wanted his life to be about and was disappointed in himself. I dunno… what do you get out of it?
After reading about Twitter and listening to an interview with him from the CBC Archives, the clown grave feels less creepy. He was just a guy who made his living entertaining people during a tumultuous time in history. It’s still sad, but in the end this is how he wanted to be memorialized. Weird to us now, but I guess it made sense to him.
You can read more about Twitter here* (website has since disappeared) and listen to a CBC Radio interview with him recorded three months before he died.
*You can see in one of the old photos that the umbrella there now was originally a bouquet of flowers. Wonder why they changed it?

View all posts by: Michelle